How cool would it be if cars and airplanes could run on gas that has been made from carbon dioxide?

Part 1 of my story about Carbon Engineering covered how they capture carbon dioxide out of the air and turn it into calcium carbonate pellets. This is part two, it covers how they turn the carbon dioxide that they extract into fuel that could be used by cars or airplanes.

So, here is how it works. Carbon dioxide from the air is turned into calcium carbonate pellets. These are heated up to reach a much more concentrated form of carbon dioxide. This reacts with hydrogen and energy and is turned into hydro carbon fuels, such as gasoline, diesel or jet fuel.

This technology enables the production of synthetic transportation fuels using only atmospheric CO₂ and hydrogen split from water, and powered by clean electricity

Carbon Engineering designed a closed cycle of turning carbon dioxide from the atmosphere into concentrated carbon dioxide and then into fuel. By utilizing as little water as possible and renewable energy for the process, they are creating a green fuel.

This technology forms an important complement to electric vehicles in the quest to deliver carbon-neutral 21st century transportation.

The BBC has an interesting article about Carbon Engineering’s technology. It also covers concerns from environmentalists that carbon capture could be used as an excuse to prolong the fossil fuel era or prevent us from reducing emissions in the first place.

I think we need to work on reduction emissions as well as capturing carbon. I would love to rely on natural ways such as restoring forests and wetlands only, but it looks like that might not be enough. Carbon Engineering’s technology certainly looks promising.

What I like most about it is the idea of tuning the extracted carbon dioxide into a valuable product. If there is monetary incentive for carbon capture this technology might get adopted more broadly.

Sign up for weekly inspiration right in your inbox

Processing…
Success! You're on the list.
Whoops! There was an error and we couldn't process your subscription. Please reload the page and try again. 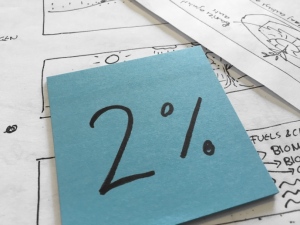 98% of climate change news are negative and doom inducing. They scare people into denial and inaction. So this blog is the 2%. It highlights all the amazing teams, citizens, and companies working on lowering greenhouse gas emissions. I hope it inspires you to take action!